While a college student in the 1980’s at Indiana University studying business administration, Mark Cuban was able to accumulate $15,000 and used it to buy a bar in town. He was successful and it became the best student bar in town.

His first entrepreneur business after he left college was the computer company MicroSolutions. He built it for seven years and then in 1990 was able to sell it to CompuServe for a $6 million price tag. After this windfall of money that made him a millionaire he tried to retire for five years. He loved to party and travel and had a lot of fun in those years but eventually had a new idea as the Dot Com bubble grew larger.

His first huge win was in 1995 co-founding one of the first internet radio websites as Broadcast.com with Todd Wagner. This was before the internet could really stream video very fast or consistently and before there was a YouTube of streaming television services. He was way ahead of his time.

Cuban was able to sell Broadcast.com to Yahoo for $5.7 billion in 1999 during the peak of the Dot Com bubble and make himself a billionaire from his ownership share in the company.

He received $1.7 billion in Yahoo! stock for the deal. He knew that the stock market bubble could not continue after the 1999 run up in prices and began to sell his Yahoo! stock and hedge with put option contracts to create ‘Option Collars’ to save his wealth from the Dot Com crash.

The option premium he paid to buy the put option contracts was equal to the premium he got for selling the covered call options, his net cost for the option play was zero dollars excluding the commission fees.

This option collar trade had two possible outcomes if Yahoo! trended strongly in either direction:

Mark Cuban executed one of the biggest and best option plays I have every heard of. Who knew he was such a great option trader?

Today he is most well known from being on the show Shark Tank and as the owner of the Dallas Mavericks NBA team. He also has ownership stakes in Magnolia Pictures and dozens of the startups he invested in through the show Shark Tank.

Cuban loves to live in luxury and has spent millions of dollars for private airplanes, a yacht, and a mansion in Dallas.

He has had to pay over $2 million in fines to the NBA.

He founded the Mark Cuban Foundation that is primarily involved in giving living assistance to families of the U.S. military who were killed or wounded in Operation Iraqi Freedom. 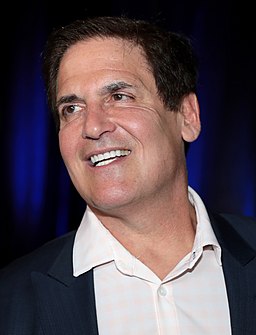