Will $SPY Continue the V-shaped Recovery Or Pullback?

This is a Guest Post by Troy Bombardia of BullMarkets.co

The stock market continues to hold at its 50% retracement. This has been one of the fiercest non-stop recoveries after a 20% selloff.

Will the stock market continue its V-shaped recovery? Or is a retracement imminent?

We think a retracement is more likely due to the macro context right now.

While the bull market could very well keep going on, the long term risk:reward no longer favors bulls. Past a certain point, risk:reward is more important than the stock market’s most probable long term direction.

Some leading indicators are showing signs of deterioration. The usual chain of events looks like this:

We are currently at the start of Phase 2. Let’s look at the data besides our Macro Index

Initial Claims and Continued Claims have been trending sideways for the past 6 months. This is not yet a long term bearish sign for the stock market and economy, but watch out if Claims start to trend upwards. They are already very low.

Initial Claims is extremely low right now. The only other time it was this low was in late-1967. Back then, the bull market had 1 more year left until a massive bear market began. The “bull market has 1 year left” scenario is the most optimistic scenario.

The Conference Board’s Leading Economic Index is trending sideways now. This is not yet a long term bearish sign for the economy and stock market, but watch out in case it starts to trend downwards over the next few months.

The Chemical Activity Barometer (a leading index) is deteriorating right now. If it deteriorates even further, then it will be a long term problem for the stock market. 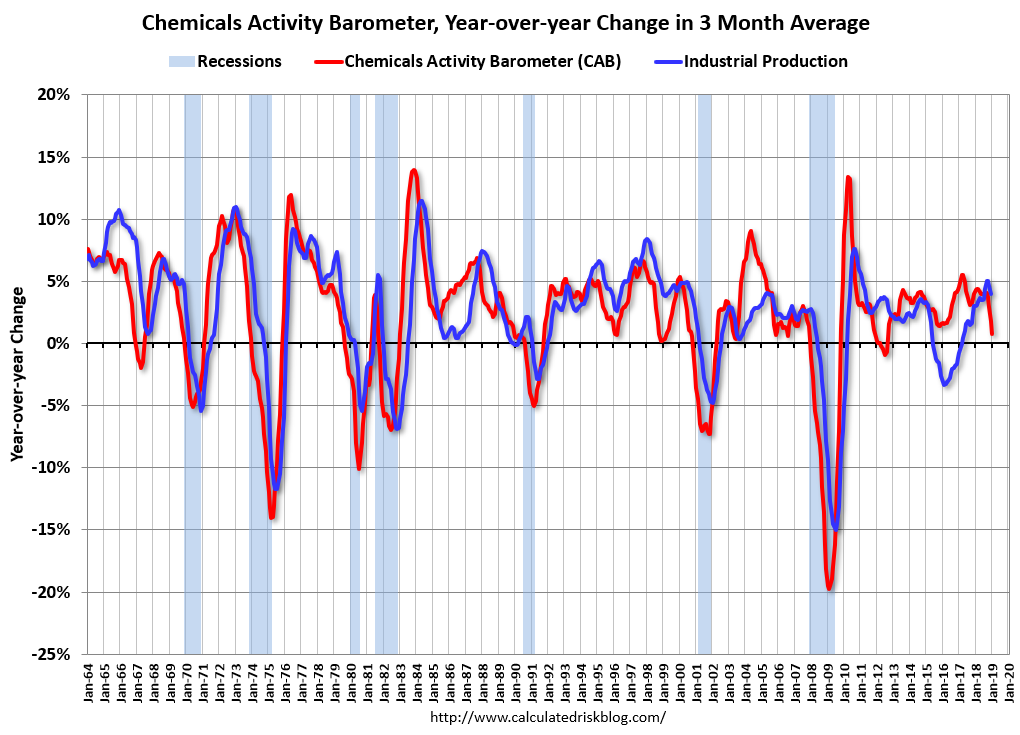 Here’s what happens next to the S&P 500 when the Chemical Activity Barometer’s year-over-year change in 3 month moving average turns negative for the first time in 1 year.

As you can see, forward returns aren’t terrific. Although this indicator does have some false signals (e.g. 2012), a negative reading usually precedes a recession.

The housing sector deteriorated in the second half of 2018. With the government shutdown now over, macro data that was delayed will slowly be released. We are waiting to see if housing deteriorates more or not.

Conclusion: The stock market’s biggest long term problem right now is that as the economy reaches “as good as it gets” and stops improving, the long term risk is to the downside.

Economic deterioration is not significant yet, so the “bull market top is in” case is not that clear right now. We’re in a “wait and see the new economic data” mode.

*For reference, here’s the random probability of the U.S. stock market going up on any given day, week, or month.

The medium term market studies are mostly mixed. However, >50% of them point to the high probability of a pullback/retest.

Can the stock market go straight up to new-all time highs today, like it did in April 1980 and 1958?

That is highly unlikely. Here’s why.

The environment is different today. There is no recession today, which means that the power to drive a non-stop rally isn’t present. Hence, the stock market probably will not rally straight to new all-time highs right now.

The S&P 500 is holding above its 50 day moving average. Is this a “sustained breakout”?

Here’s what happens next to the S&P when it closes above its 50 dma for 4 consecutive days, for the first time in 3 months

As you can see, there’s a strong tendency for the stock market to fall over the next 2-3 months. Why?

When the S&P is below its 50 dma for 3 consecutive months, it means that the S&P has been in a long and persistent downtrend. As we’ve shown in the past, sharp downtrends are usually followed by a bounce to the 50% retracement, and then a pullback/retest.

One of the most notable things right now is the S&P 500’s clear risk-on and risk-off correlation with defensive sectors (XLU).

Traditional technical analysis teaches us that this is a bad sign for the stock market.

Here’s what happens next to the S&P when the S&P goes up more than 7% over the past 23 days, while XLU (utilities sector) falls.

As you can see, this isn’t a strong consistently bearish factor for the stock market on any time frame. However, there is a slight bearish lean over the next 3 months.

The Dow Jones Industrial Average is up 5 weeks in a row, while under its 50 weekly moving average.

Historically, the Dow’s 3 month forward returns were worse than random.

Breadth remains very strong. The NYSE McClellan Oscillator remains above 50 for 15 consecutive days. This streak is unprecedented, from 1998 – present

Here are similar instances when the NYSE McClellan Oscillator remained above 50 for 10 consecutive days, and what the S&P did next. Forward returns were quite bullish on every time frame.

*As I have explained in the past, breadth indicators are of secondary importance. As ETFs gain in popularity, breadth extremes will become more common (and less useful) than they used to.

Here’s something very interesting about the stock market right now. While the housing data has been very weak over the past half year, the real estate sector (as shown through REIT’s) has been very strong.

RWR (an REIT ETF) is much closer to making an all-time high than the S&P 500.

Is this a long term bullish sign for the stock market?

*In the past, RWR weakened while the S&P rallied towards the end of a bull market.

As you can see, this isn’t consistently bullish for the S&P 500.

However, it is quite bullish for RWR itself.

I think real estate will outperform during the next recession and bear market. This is an extremely contrarian view, because mainstream finance thinks “real estate is a bubble, prices are too expensive, CRASH CRASH CRASH”. Here’s how I see it.

Yes, real estate is very expensive. However, prices have been so high that it’s been out of reach for many young adults. This means that there’s a lot of underlying demand, just not at the current price. When real estate prices fall in the next recession/bear market, there will be a lot of demand waiting to catch real estate at the bottom. This will buffer the fallout in real estate, preventing a real estate collapse like 2008.

Moreover, there isn’t the same kind of housing excess this time that is typically present in prior economic expansions. For example, Housing Starts is still very low.

*Take these thoughts with a grain of salt. We focus on the stock market, not real estate.

While the stock market has been very volatile over the past 4 months (massive up and down swings), the U.S. Dollar has gone nowhere.

As you can see, the stock market’s forward returns are mostly random.

However, this is a bearish factor for the USD over the next 2-3 months.

Perhaps the stock market will pullback/retest and the USD will fall at the same time?

And lastly, emerging markets have finally broken out after a horrible 2018. EEM has broken above its 200 day moving average for the first time in 7 months.

This is rare, and forward returns for emerging markets are mostly random. This is neither a bullish nor bearish sign for EEM.

Nevertheless, there is a slight bearish lean right now.

AAII is one of the more popular sentiment indicators out there. AAII Bears % (pessimism) has been above average for 18 of the past 20 weeks.

This is quite a long time for sustained pessimism.

Here are similar instances in the past, and what the S&P 500 did next.

Interestingly enough, the S&P tends to do ok over the next 1-2 weeks. This shows that the short term is extremely hard to predict. At any given point in time, there are always bullish and bearish short term factors that conflict with eachother.

With February just around the corner, the S&P 500 is still under its 200 day moving average.

Here’s what happens to the S&P in February when the S&P is below its 200 dma (i.e. in a downtrend)

As you can see, the stock market has a bearish lean in the first half of February. Absent the support of corporate earnings, stocks tend to fall in the short term.

*This is what happened in February 2018. Stocks held up fine throughout earnings season in January, and then cratered in February.

While the VIX has mostly come back down, it remains slightly elevated.

Here’s what happens next to the S&P when VIX remains above 15 for at least 75 consecutive days.

As you can see, the S&P tends to fall in the short term…

…and the VIX is not long term bullish.

Here is our discretionary market outlook: