A parabolic curve in stocks is when a chart makes an upward price move that looks like the right side of a parabolic curve on the chart. A parabolic move happens when the buying pressure on a stock creates an exponential move in the price due to the speed and magnitude of the move upwards causing the stock to multiple many times from its original value. 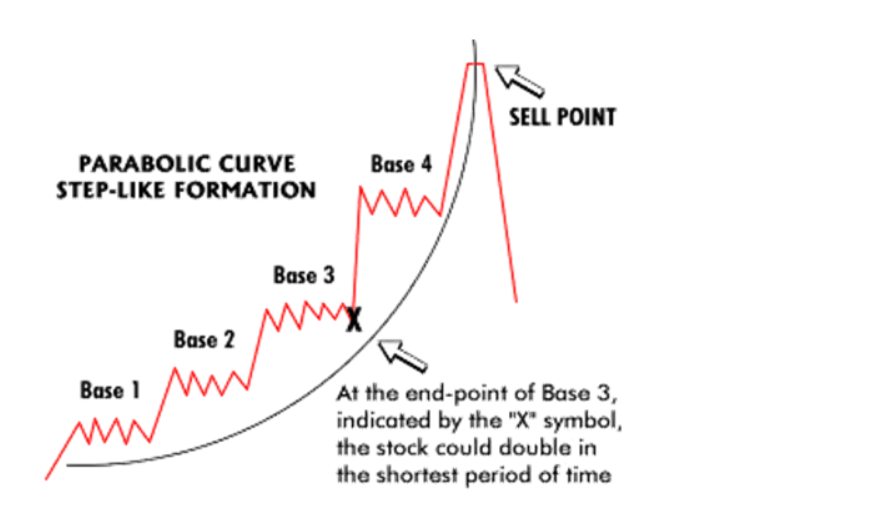 A parabolic curve on a stock chart looks like the right side of a parabolic curve. It doesn’t touch lower price support levels like ascending trend lines but instead shows the upward curve in the trend in price through an external line.

What is a parabolic pattern?

The parabolic curve chart pattern is one of the strongest uptrend patterns a stock can have. This type of pattern goes up the farthest and the fastest as it is under the strongest accumulation and every small pullback is bought by eager traders and investors.

The parabolic curve is named after the parabola, because the ascending curving trend line used to identify the strength of this pattern from the price support action looks like a parabola. This strong price pattern can give a trend trader incredibly high returns in a very short period.

Many times you will see stocks going up like this near the beginning or end of a bull market advance. This pattern creates short term price range bases before breaking out to new highs and repeating this range pattern multiple times as it keeps going higher.

The price action pattern that creates the parabolic curve looks like a staircase. This pattern can last for weeks and sometimes months. The danger for long positions is greatest near the end of the formation after the biggest move straight up into extremely overbought territory. The strong upward price action usually ends suddenly in a price plunge that falls even faster than it rose.

How do you trade a parabolic curve?

The key in trading a trend this strong is capturing as much of the move to the upside as possible early in the move on the original breakout in price action from a previous range. For proper risk management with open profits it’s crucial to use trailing stops and also having a plan to exit and lock in gains while they are there and not riding a stock all the way back down. Your time frame for the trade can determine what moving average or trading range to use to capture your piece of the price action.

While this pattern is rare and only happens in the most speculative stocks and now cryptocurrencies the first step to capturing it is having a high quality watchlist of the hottest market leaders currently in the market. Many times volatility can make this pattern difficult to trade so proper position sizing and a trading plan before entry is crucial to success.